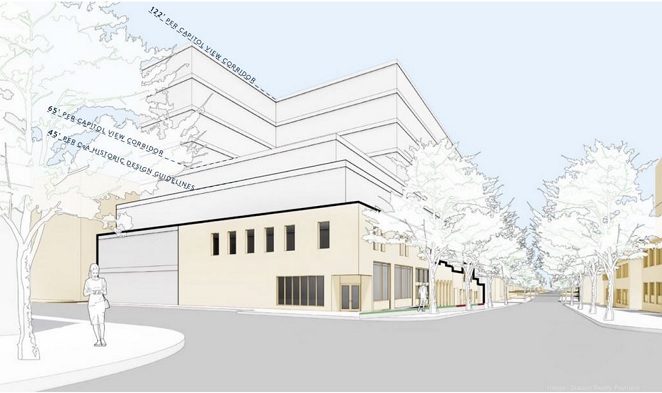 As owners of more than 40 properties on the famed downtown strip between Brazos Street and I-35, Stream Realty Partners LP aims to elevate the three-block area that has a reputation for late-night drunken revelry into a central location that will continue to uphold and preserve the city’s identity as a haven for musicians and artists — with an emphasis on local business and organizations already operating in Austin.

Stream Realty Senior Vice President Caitlyn Ryan told the Austin Arts Commission Aug. 15 that the firm felt a responsibility to improve the street located in the heart of the Central Business District.

“As local Austinites, we thought is was our duty to come here and really create something special,” said Ryan, who is based out of the firm's Austin office at the corner of Congress Avenue and Sixth Street.

“It’s not a renovation, it's a revitalization,” Ryan added. “We are going to come and spend a lot of our own money to create a district-wide feel and have this be something that Austin can be really proud of. Music and arts are what drive this district as something that we can all be proud of. A safe haven for local Austin businesses. We want to be safe haven.”

The company was founded in 1996 and is involved in more than $5.8 billion in real estate transactions annually, according to its LinkedIn page.

Ryan said the most transformative projects on the street will occur in spaces that have been determined to have the least historical significance.

“We want to get some people down there and to make Sixth Street an 18-hour day,” Ryan said. “Sixth Street does not have a bar problem. It has a ratio problem. Right not it is 5% restaurants and 95% bars. We just want to even that out a bit. We have a great opportunity to start that. We want to be careful with who we get into these buildings because we want to make sure everybody is rowing the ship in the same direction.”

Stream has requested that the City of Austin approve construction up to 122 feet for an office building in the district's 600 block and more than 70 feet for a new 150- to 160-room hotel on the 500 block.

Building heights are capped at 45 feet in much of the district, but June 9 City Council unanimously voted to direct staff to create a code amendment that, if passed, would allow Stream to move forward with their plans to build up.

The change requires approval from the Historic Landmark Commission and the Planning Commission before it can be brought to Council for a second reading prior to a Nov. 3 deadline.

Stream is now moving forward with drafting the architectural plans for the proposed hotel and commercial high-rise.

“To the extent that we can keep Austin’s flavor, I am there 100% because I have been here 46 years and I have seen everything change so much,” said Maria Luisa Flores, a member of the commission. “I have seen a lot of things go away but it is sad because it means a lot of artists and musicians lose out on opportunities. I appreciate that sensitivity and including that in your vision. I am excited to hear all this.”

Ryan said the office building will bring at least 600 new parking spaces to downtown and the hotel will include a below-ground music venue.

“It can be something that represents Austin, in a unique way, can demonstrate Austin’s history,” Ryan said.

Meanwhile, the 600 block is planned to be the site of a new office building meant to channel Radio City Music Hall in New York City.

“We want it to be where people forget that it is an office building,” Ryan said.

A rooftop venue is planned for the 700 block of the strip.

Stream also plans to remove access to street parking and extend sidewalks to a total of 25 feet to allow for outdoor cafes and installations. The sidewalks are currently 12 feet wide. Outdoor exhibitions will be organized by a dedicated curator, Ryan said.

“Music and arts are what drive this district as something that we can all be proud of,” Ryan said.

Stream's plans coincide with efforts at City Hall to protect Austin's reputation as the Live Music Capital of the World.

July 28 City Council approved an ordinance that starts the process of defining a "live music venue" in city code, paving the way for music venues to tap into city programs and revenue previously out of reach.

The move also coincides with newly established Iconic Venue Fund and Cultural Trust, which in July identified 14 live music venues and creative spaces that are eligible to receive millions of dollars in funding.

On Sixth Street, Stream is working to uncover and highlight the district’s value to the general public with the assistance of Preservation Austin, a nonprofit organization dedicated to archiving and safeguarding the city’s history.

“There is a great way, through artwork, to honor those folks and really represent them,” Ryan said.